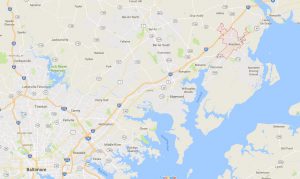 Aberdeen, MD is a small city located just 26 miles northeast of Baltimore. It is also only a little more than an hour drive away from Philadelphia. The Elk river runs to the south of Aberdeen, while Interstate 95 passes through the north end of the city. Aberdeen has a population of around 15,000 people; it is a fairly small, tightly knit community. Many of the people who live in Aberdeen commute to Baltimore for work, but there is also a large army base to the south of the town that employs thousands of residents. This base, the Aberdeen Proving Ground, is the headquarters of the United States Army Test and Evaluation Command.  The weather in Aberdeen is mild, with humid summers and mild winters. The annual high temperature is around 64 degrees, and the annual low temperature is 46 degrees. The city of Aberdeen occupies approximately 7 square miles, making it fairly small as far as cities go, but within this modest area there are plenty of interesting things to discover. If you are passing down the I-95 and want to explore for a while, Aberdeen is easy to navigate and traffic is usually light.

Though Aberdeen is on the smaller side, it still contains several distinct neighborhoods. Webster and Webster Village encompasses most of the area north of Interstate 95. This is the most affluent neighborhood in Aberdeen, with the highest housing prices and the lowest crime rates. The Burns Corner and West Bel Air Avenue neighborhoods are just south of Interstate 95. These two small neighborhoods are slightly less expensive than Webster, and are still safe and quiet places to live. Further south, the City Center and South Philadelphia Road areas contain the cheapest real estate, with plenty of small, more affordable apartments available for renters. To the southwest, the neighborhood of Perryman offers more suburban living, close to the Bush river and Aberdeen Proving Ground. Across Aberdeen, the median home value is 220,000 dollars, making it an affordable place to live.

Next -> Things to Do in Aberdeen, MD