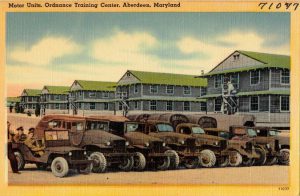 The city of Aberdeen has a rich and interesting history going back to its founding around 1800. The original village of Aberdeen was developed by Edmund Law Rogers. He named the village after Aberdeen, Scotland, a place to which his family had close ties. Modern Aberdeen is an amalgamation of three smaller communities; the village of Aberdeen, Halls Cross Roads, and Mechanicsville. In 1892, Aberdeen was incorporated as a town. The local government was originally composed of a board of commissioners, but in 1992, when the town became a city, it was decided that the government should be headed by a mayor. Ruth Elliot was the first elected mayor of Aberdeen. The current mayor of Aberdeen, Patrick McGrady, was elected in 2015. The city contains several houses on the National Register of Historic Places, including the James B. Baker House and Chestnut Ridge.

Perhaps the most important event in the history of Aberdeen was the founding of the Aberdeen Proving Grounds. It was established on the orders of president Woodrow Wilson on October 20th, 1917, as an area to aid in the design and testing of military ordinance. Originally it was divided into two different sites, the Edgewood Arsenal and the Aberdeen Proving Ground, but they were merged in 1971, creating an area of more than 72,000 acres for exclusive military use. 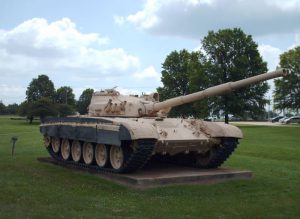 In the beginning, the site was used mainly for the testing of artillery weapons. During World War 1, chemical weapons such as mustard gas were manufactured at the Edgewood Arsenal and installed in artillery shells. After the war, the site grew to accommodate a more far-reaching mandate that includes the testing of tanks and other vehicles. After World War 1, gas masks to counter chemical weapons were developed and tested here. The Aberdeen Proving Grounds is the oldest active ordinance testing area in the United States. During World War Two, an early version of a digital computer was developed here to calculate firing patterns for artillery. In the 1950’s and 1960’s, the Aberdeen Proving Grounds was used to carry out research on new chemical weapons. Numerous classified medical studies of the effects of small doses of different chemicals were carried out here. In 1969, Agent Orange was tested in an area near Edgewood Arsenal. After a 1969 ban on the production and transportation of chemical weapons, the focus turned to defense against biological agents, with important tests being carried out to this day.

The Aberdeen Proving Grounds has been a boon to the local community, employing more than 7,500 civilians and 5000 military personnel. However, its impact on the area has not been completely positive. The Edgewood area of the site was added to the Environmental Protection Agency’s National Priorities List in 1990. This list encompasses some of the most serious hazardous waste sites needing long term remedial action. Sometimes tests at the site can be heard and seen from the city of Aberdeen, but the military usually notifies the local people well in advance of such events.